Should we prioritise cash transfers to the urban poor?

Note: I owe these ideas to Rossa O’Keeffe-O’Donovan and Natalie Quinn. However, the views expressed here are solely mine.

It’s helpful to think in terms of real goods instead of thinking in terms of money. Suppose there was a village in complete autarky: trade only occurs within the village. Say we gave everyone in the village $1,000. Nothing on the ground directly changes: they don’t get better tools, or more fertile land, just because we give them fiat money. What happens to consumption depends on the income distribution prior to the transfer. If all villagers have the same income, they will keep producing the same goods as before, and exchanging them in the same way, the prices will simply be higher1. If they had different incomes, the cash transfer will make them more equal in purchasing power, while also increasing prices (imagine if the transfer was a billion dollars). This amounts to a modest transfer of real goods from richer to poorer villagers2.

Now suppose we only gave $1,000 to a randomly selected half of the villagers. Nothing immediately happens to the productive capacity of the village. Prices rise, which means purchasing power is transferred from non-recipients to recipients. The exact effect on consumption is a bit complicated. In an extremely simple economy where everyone consumes as much as possible of the staple good, recipients consume more, non-recipients consume less, and that’s the end of it. More realistically, the recipients create some new demand for luxury goods. Regardless, the welfare effect of the purchasing power transfer seem likely to be negative. What certainly doesn’t happen is that real goods are transferred from the person who funded the cash transfer programme (say, a GiveDirectly donor) to anyone in the village. This is impossible since the village is in autarky.

Even imperceptible price effects can change everything

If the village were trading with other villages, the price increases would be more spread out, and the effect would be a transfer of purchasing power to the recipients from everyone else in the trade market. More generally, a cash transfer to recipient A is a real good transfer to A, from everyone who trades with A, directly or indirectly. An interesting empirical point is the following. If the market is large, the price effects could be spread across tens of thousands of people, thus they would be very small for each person. Then extremely high statistical power is required to distinguish these price effects from zero. But imperceptible effects on large numbers of people can still be very morally important (see Parfit’s Five Mistakes in Moral Mathematics). In this case, the imperceptible price effects reflect the fact that the cash transfer can’t increase real consumption within the market. So they are everything that matters!

In the case of GiveDirectly, things aren’t quite as bad as in my toy examples above. GiveDirectly targets the poorest inhabitants in a village, so even if the village were in complete autarky, GiveDirectly would cause a real goods transfer from richer inhabitants of the village to the poorer inhabitants (and a much bigger one than if the transfer was given to everyone). If all of western Kenya was in autarky, but there was costless trading within, the transfer would be from everyone in western Kenya (weighted by how much they consume) to the recipients. Notice how different this is from what we might have expected before taking into account price effects: a real transfer from the GiveDirectly donor to the recipient.

In the more economically developed villages in the sample, households’ purchasing power is only modestly affected by these price effects. In the less developed villages, the price effects are much larger in magnitude, which we show is partly due to these villages being less tied to the outside economy and partly due to their having less competition among local suppliers.

Now, to me there is an obvious policy implication here: you should transfer cash not to the poorest, but to those who score highest on some combination of low income and access to the world economy. Income being equal, you should transfer to the most globalised recipients you can find. The importance of this can be enormous. If you give to someone in an autarkic village, you transfer goods from poor Kenyans to very poor Kenyans. If you give to a globalised city-dweller, the real transfer is from yourself to the recipient.

I haven’t been able to find any discussion of this policy implication in the literature. This is quite surprising for something that naturally follows from supply and demand theory.

There could be practical problems with this policy. Most obviously, people who live in globalised cities are typically rich, and those who live in isolated villages are typically poor4. So the ideal recipient, say someone who lives in Mumbai but is as poor as a rural day labourer, may not exist. (It could also be harder to identify the poor in the cities. But the operation costs of a cash transfer programme could perhaps be lower.)

Here’s a diagram of meta-ethical theories, loosely based on Figure 1.9 in Miller’s Introduction to contemporary metaethics.1

Relationships between games and solution concepts

The basic notion of strategic game can be extended in two directions: adding imperfect information, and adding sequential moves. This gives nice matryoshka dolls of types of games, depicted below with page numbers in Osborne and Rubinstein (OR) in brackets. 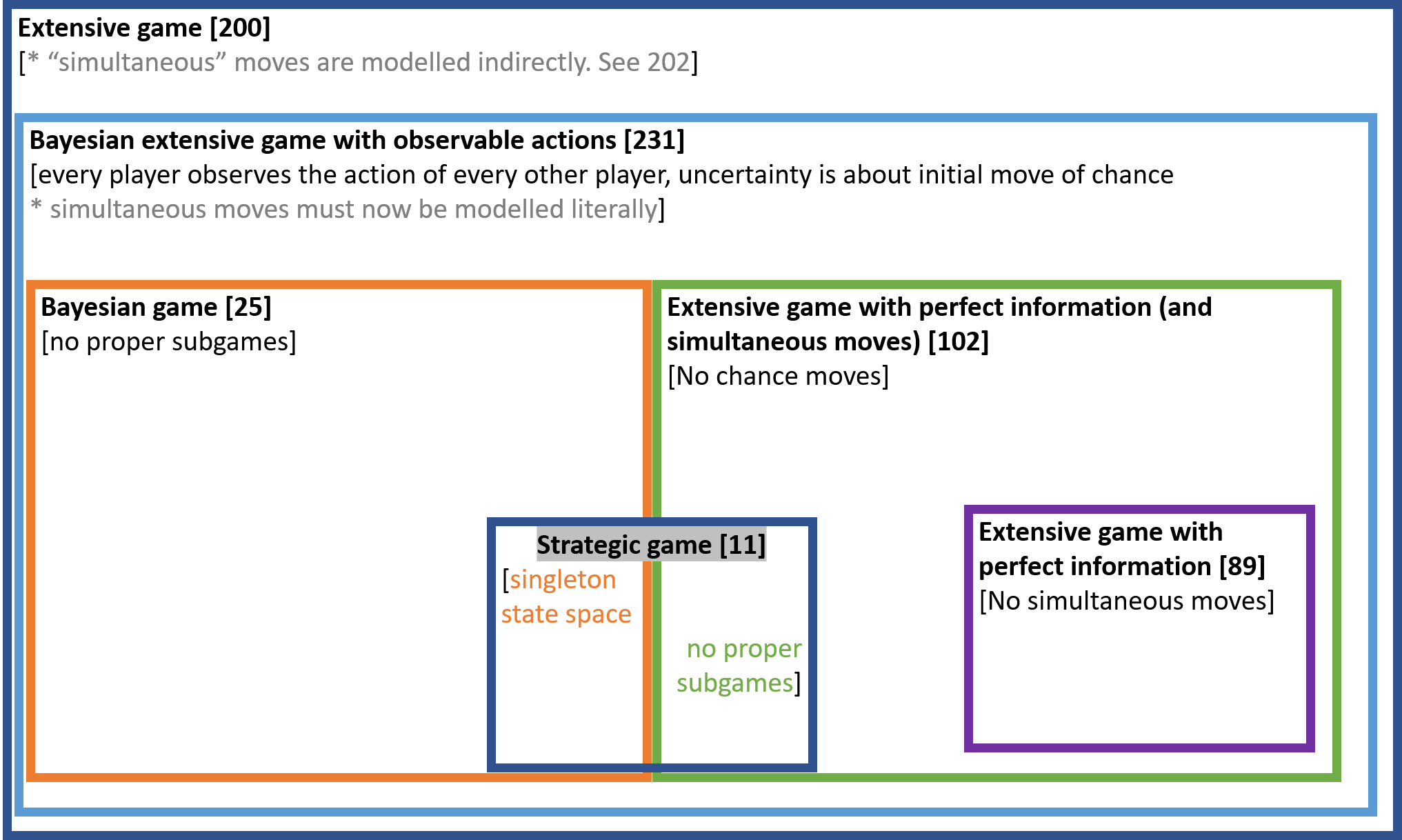 Each type of game has a solution concept that is arguably natural to it.

Applying the solution concept of a more general game to a more specific game can always be done, but it is uninteresting. For example, all Nash equilibria of a strategic game are trivially subgame perfect, and trivially Bayesian.

We can also apply the solution concept of a more specific game to a more general game, for example, we can find the Nash equilibria of a game with sequential moves; some of these will not be subgame perfect. Suppose we wanted to do the same thing with Bayesian games. I found that this does not work straight out of the box when using the definitions from OR and other standard textbooks. We will need to make some small changes. In 26.1, OR make the following definition1:

Given these definitions, we can find:

This gives us this diagram: 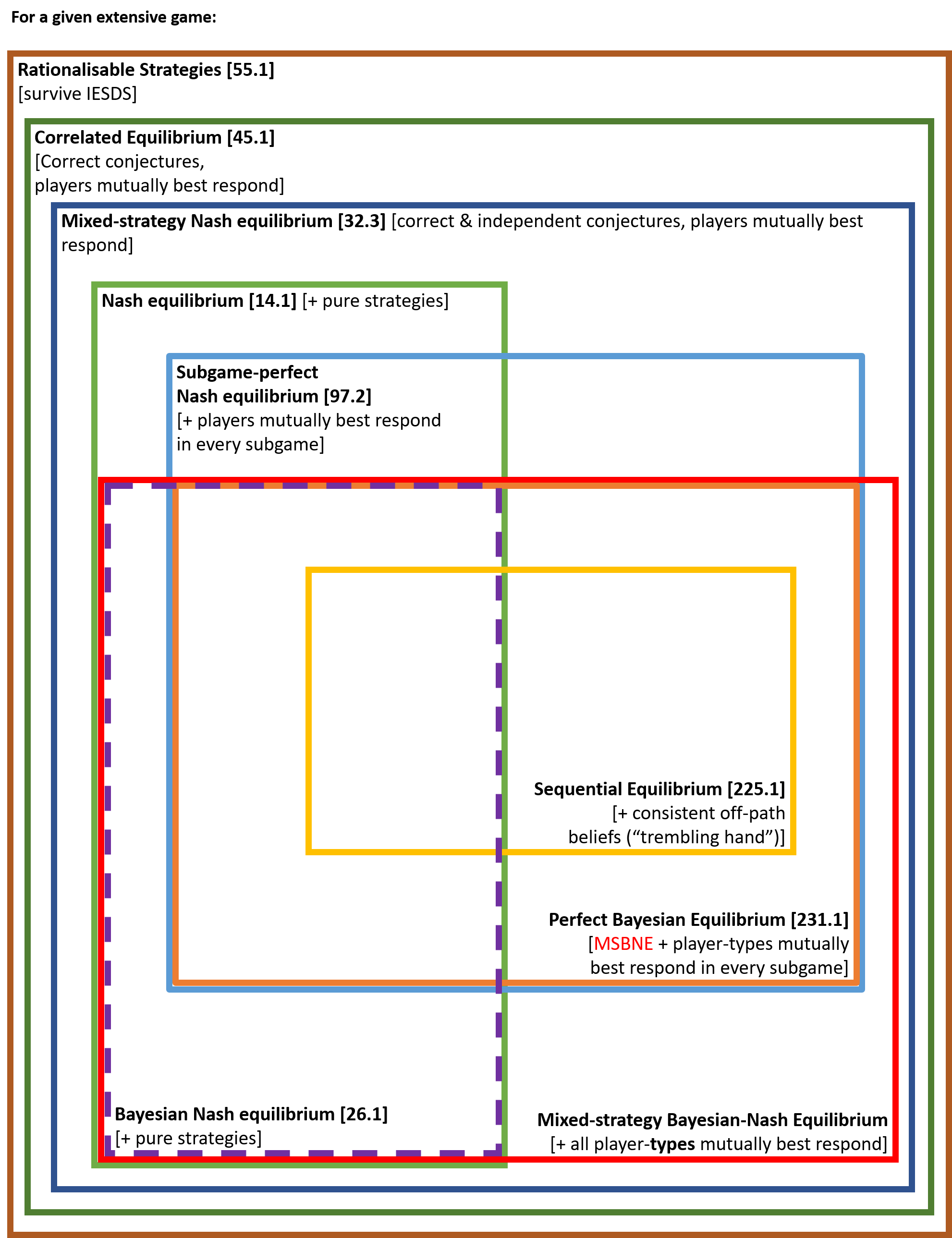 Notice that we really could not have put all the solution concepts on one diagram if we had been using the standard definition. It would not make sense to speak of the Nash equilibria of a general extensive game, as a proper superset of its Bayesian-Nash equilibria. We would have needed two separate diagrams, one for games of imperfect information, and one for games of perfect information.

Here are some sources for the claims in the second diagram: